c o l l e c t i n g  e x p e r i e n c e s  •  s e l e c t i n g  m e m o r i e s
​
12 things to remember before we die
Kingfisher green, emerald, reflecting on the water of a silent stream.
One thousand colourful droplets of rain-tears.
Sweet tears at the top of a river bridge while watching the rough muddy waters after a heavy storm.
A sensation somewhere in the middle of the chest, being in love.
The smell of wet soil after a summer rain.
Behind windows, the winter sunlight touching a pair of closed eyes.
A nice cup of tea after a 15 mile walk.
The smell of coffee on an early autumn morning.
A big breath after a day’s hard work and achievement.
Dreamy songs composed by raindrops.
The sound of seawaves on a calm summer’s day.
Swimming inside river water, smelling wild lilies and looking straight in the eyes of a dragon fly 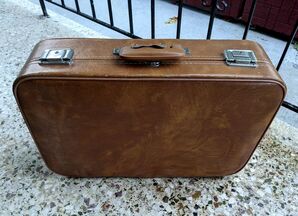 The sun is the constant reminder of our ​impermanence, the water reminds us of continuity..

I was happy once..
​My dad's front teeth had a little gap between them, kind of cute I always thought. And behind these teeth there was that dim smile; he was looking at me singing "Que será, será, Whatever will be will be, The future's not ours to see, Que será, será..".
The next moment that dull face would become monstrous. Its breath echoing loud voices, commands; it would touch my cheek, this big red head, fuming fire, anger, rage, big teeth with big gaps ready to tear me apart. 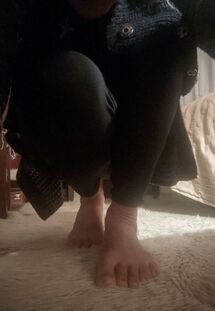 Years deep
​They told me I am 4cm shorter; my skin becomes like the roots of an old olive tree; the wrinkles change the expression of my mood, do I smile or am I sad; hands look like dry leaves at the end of the autumn season; sexuality has been driving to the West. But I still feel like a child, alive and free,  that child who was silently whispering sounds in the quietness of the night… 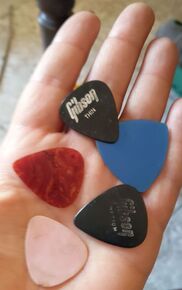 ​A Dream of love and grief
Last night I dreamed of you. Like you came from the "other world" just to see me. just for one night. A very long and real dream. That we had a lovely time, just for one day. That day. or night. I was with someone else. But when you came to me I left the "other" guy,  just to connect back with you.. like then.. Very shy, very very shy... but in such a great desire to be with you. An erotic desire when two people become absolutely one... Oh Phil... I miss you so much...   And I got back to the conscious mind just to realise that I had just been dreaming. and I just started to cry the silent cry, very deep cry. The sadness of loss never goes away.. But those that we buried are still alive, inside of us. Because memory is an alive real thing, and not a fantasy.. 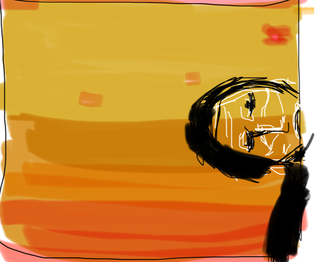 (A generation of loneliness and self-centeredness, with "man and dog" stories) 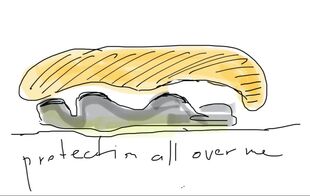 Small stories of naive poetry
Clouds passing by, then turning into more sky..
Sea waves coming and merging with the sand just to become water and then waves ... again. Mountains transforming into beasts when the sun shines brightly behind them, then returning into peaceful figures... Rivers running, creating new shapes made from new experiences, then becoming shapeless water... Animals walking and resting, talking and drinking, becoming other forms of life themselves, birds, insects or mammals. Human babies transforming to adults, seven stages of life, good and bad, beautiful and ugly and all together... A universe of billions stars creating new lives, just to become another universe... again.
Our Cosmos

A winter walk on a Cretan mountain
​
Every time I take a path I can see it penetrating the land cutting the soil, almost like opening a wound whose top skin has been cracked and removed. Paths, made by man or animal or just being geological formations, are placed here centuries ago eventually becoming part of the planet’s history..

I see bushes leaning to one side or touching the ground. I observe plants bent by the wind, or leaning towards the sun. They are pulled by invisible microscopic threads like spider webs to the near by trees which keep everything attached to the land. Trees with figure-like shapes, often associated with unearthly creatures, are standing in familiar poses, praying, kneeling, lying, begging, threatening, hugging.

And then the wisely formed rocks, with their small holes and uneven steps, are home to known or unknown grasses; and passing insects, flies butterflies lizards snakes mice badgers rabbits scorpions ants…

My eyes are drawn up above the rocks and the trees; there is a bird perched, watching. I walk next to it and when it realises I am close by it flies calmly away; there is no fear just an instinct, it knows I was not a threat.
And then beyond any landlines there are the skies and the sea, miles of light and water. Beyond, another land again; and in between some fading islands like sea beasts floating in the huge waterbody.

Finally my eyes fly above into the skies, standing still for a few moments, an out of body experience. So much freedom in a soundless scape, there is no life no death just pure contentment. Fluffy white clouds, grey blue skies, the gift of feeling embraced by the universe. 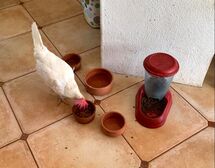 Pikwik (RIP)
The house in the country
Following a path behind the small green metal gate, the house appears like a well hidden den, covered in greenery. Its doors are always open, providing shelter to every passing by animal besides its resident cats, chickens and insects. Oh.. and to  humans too. Scattered chickens full of confidence, are always trying to get in the house with the first opportunity, sleep in a cats bed and practice typing on a laptop keyboard. Two black, two brown and one white are named Madam Lulu, Craquotte, Falbala, Baboula and the amazing Pikwik who is  sleeping on top of a tree, using the cat flap, eating cat food and laying its white eggs inside the cat bed and the cupboard .
One the other hand cats are typically relaxed, all upgraded from strays to royal family members. 4 gingers, one white, one grey and two tabby, they are named Picpus, Clopinou, Ganoche, Parapon, Grisou, Kokkinos, Pomponette and Pompon.
I feel so grateful to the owner of the house for her hospitality in this paradise.
Quotes
​
We shall not cease from exploration. And the end of all our exploring. Will be to arrive where we started. And know the place for the first time. Through the unknown, remembered gate…
—T.S. ELIOT,  from “Little Gidding” Four Quartets

To see a World in a Grain of Sand
And a Heaven in a Wild Flower,
Hold Infinity in the palm of your hand
And Eternity in an hour.
A Robin Redbreast in a Cage
Puts all Heaven in a Rage.​
—WILLIAM BLAKE , from "To See a World...", Auguries of Innocence

Only love expands intelligence. To live with love is to accept the other and the conditions of his existence as a source of richness, not as opposition, restriction or limitation.
—HUMBERT MATURANA

'Sorrow is knowledge, those that know the most must mourn the deepest
--LORD BYRON

It's fine to be in Crete, but only to gain momentum. In a few months' time I felt constricted again. The roads narrowed, my family home shrank, the marigolds in the yard lost their fragrance. Observing how my old friends had settled in, I was seized with terror. I vowed never to shut myself up inside the four walls of an office, never to come to terms with the good life, never to sign an agreement with necessity. I used to go down to the harbour and gaze at the sea. It seemed a doorway to freedom. Or to open it and flee!
--KAZANTZAKIS, Report to Greco.